If so, we hope you are enjoying our Destination by Alphabet over the past few weeks. Our focus on the Blog this week - “I” is for Istanbul.

Istanbul is a magical, exotic city with incredible architecture and a vast culinary heritage. As a teenager, a school trip in 1978 took me there. The sights and sounds of the Grand Bazaar made a lasting impression. Its sheer size was overwhelming.

No trip to Istanbul would be complete without a stop in the Bazaar. The Grand Bazaar (Kapalı Çarşı) was built in the 15th century. It is the oldest covered market in the world. Covering an area of 54,653 square meters. It is also one of the world’s biggest covered markets. It is a maze of 56 interconnecting vaulted passages, housing over 4,000 shops with persistent shopkeepers eager to use what some might consider their relentless sales tricks. I found the people so friendly and welcoming…….well, perhaps a little too friendly? I will never forget stopping at a stall filled with the most amazing rugs in every shape, size and colour. There were so many! The shop owner spoke English and we struck up a great conversation. He was fascinated with my blue eyes and wanted to know all about Canada. My English teacher joined us and told me it was time to head out. The rug merchant wanted me to stay and insisted he would pay 100 camels for me. He didn’t want to take no for an answer……..I’m fairly certain he was just teasing the “tourists” but his hand on my arm made my younger self a bit worried in the moment! He reluctantly agreed and with a big smile gave me a small sample of fabric as a souvenir. 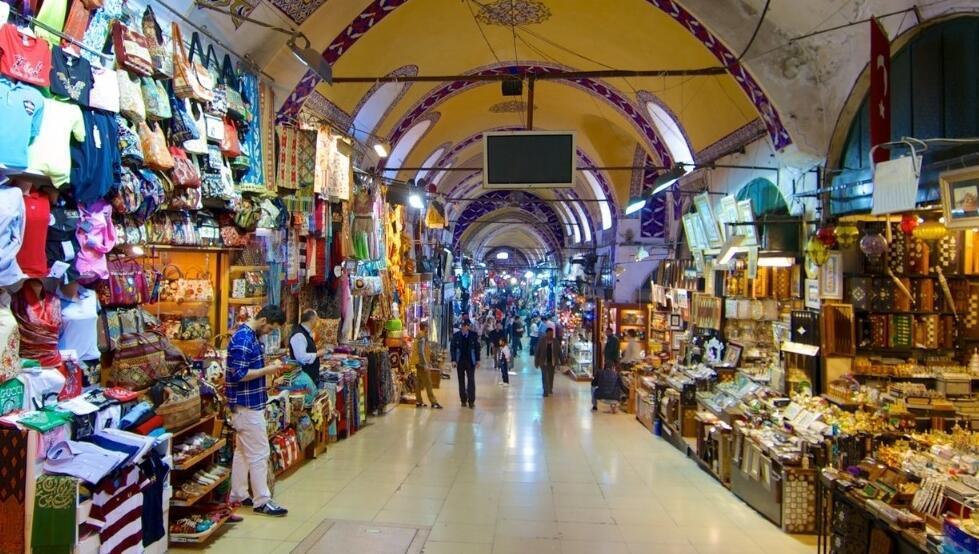 What’s with the name change?

Sing it with me…………Istanbul, formerly Constantinople in ancient Byzantium, was the largest city and principal seaport of Turkey. Back in the day it was the capital of both the Byzantine Empire and the Ottoman Empire.

The name Byzantium likely derived from Byzas, leader of the Greeks. According to legend, he captured the peninsula from pastoral Thracian tribes and built the town around 657BC. In 196CE, having razed the town for opposing him in a civil war, the Roman emperor Septimius Severus rebuilt it, naming it Augusta Antonina in honour of his son. In 330CE, when Constantine the Great dedicated the city as his capital, he called it New Rome. Coins continued to be stamped Byzantium until he ordered the substitution of Constantinopolis. At the end of the 1st millennium, Greek speakers were reported to refer to trips there as eis tēn polin, “into the City,” rather than “to Constantinople.” By the 13th century this Greek phrase had become an appellation for the city: Istinpolin. Through a series of speech permutations over a span of centuries, this name became Istanbul. However, until the Turkish Post Office officially changed the name in 1930 the city continued as Constantinople. Confusing? Yes.

The old walled city of Istanbul stands on a triangular peninsula between Europe and Asia. For more than 2,500 years the city has stood between conflicting surges of religion, culture, and imperial power. Sometimes as a bridge and sometimes as a barrier, for most of those years it was one of the most coveted cities in the world. Istanbul’s strategic location attracted many marauding armies - the Greeks, Romans and Venetians took turns ruling before the Ottomans stormed into town and decided to stay. Physical reminders of these various rulers can be found across the city. The fact that the city straddles two continents wasn't its only attractive quality – it was also the final stage on the legendary Silk Road linking Asia with Europe. Many merchants who arrived liked it so much that they, too, decided to stay. In so doing, they gave the city a cultural diversity that it retains to this day. 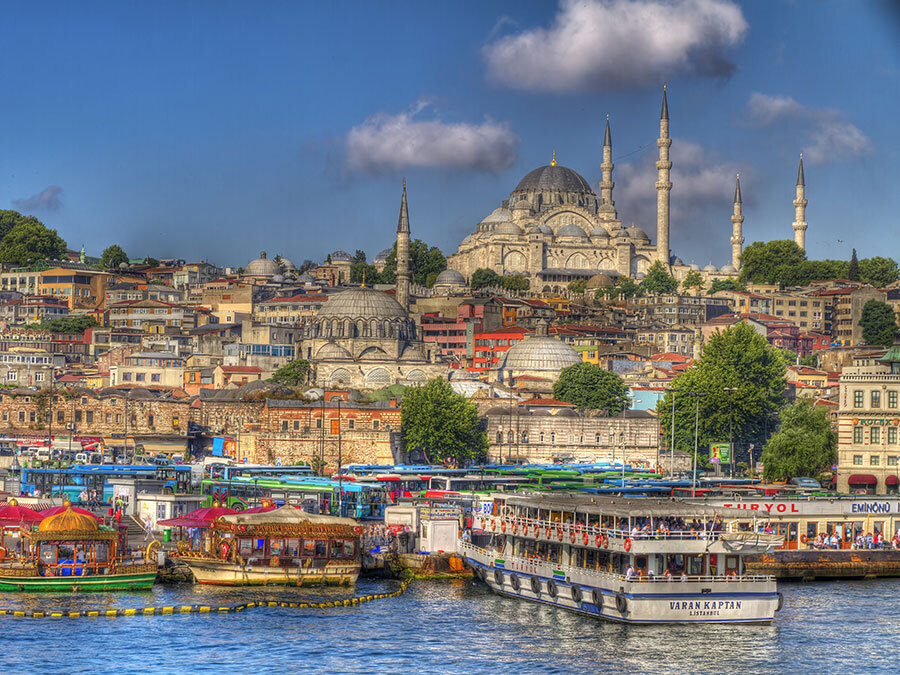 Conquering armies of ancient times tended to ransack cities rather than endow them with artistic treasures. Fortunately that changed with the Byzantines who instead built beautiful churches and palaces and adorned them with mosaics and frescoes. Miraculously, many of these remain today. Their successors, the Ottomans, also launched an ambitious building program during their rule. Today these magnificently decorated imperial mosques are architectural triumphs that form one of the world's great skylines.

The most famous of these is the Sultan Ahmed Mosque, also known as the Blue Mosque. Hand-painted blue tiles adorn the mosque’s interior walls. At night the mosque is bathed in blue as lights frame the mosque’s five main domes, six minarets and eight secondary domes. From the Ottoman-era, it was constructed between 1609 and 1616 during the rule of Ahmed I. Its Külliye (a complex of buildings adjacent to a mosque) contains Ahmed's tomb, a madrasah (a Muslim college) and a hospice. This beautiful, functioning mosque is one of the most popular sites in all of Turkey. 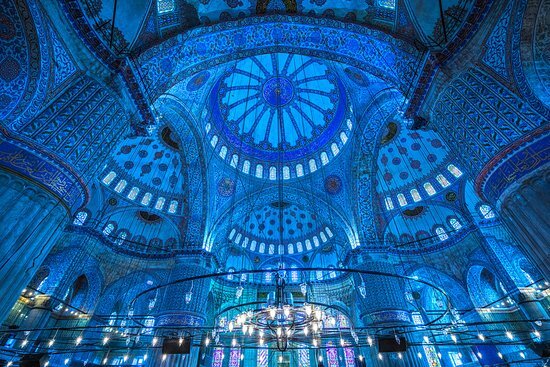 Beside the Blue Mosque is the Hagia Sophia. The Hagia Sophia was originally a Byzantine church built in the sixth century. It served as the center of religious, political, and artistic life for the Byzantine world. For a short period in the 13th century it was a Catholic church. Converted into a mosque in 1453, it became a symbol of the Ottoman conquest of Istanbul by Mehmed II. The building owes its additional splendour to the Ottoman architect of Armenian origin, Mimar Sinan. Between 1566 and 1574, Sinan extensively strengthened the Byzantine structure by adding two more minarets, securing its status as a monument that amalgamated symbols of both Christianity and Sunni Islam. This made the building something unique in the world. It was the principal mosque of Istanbul until the Blue Mosque's construction, serving as important site of Muslim worship. 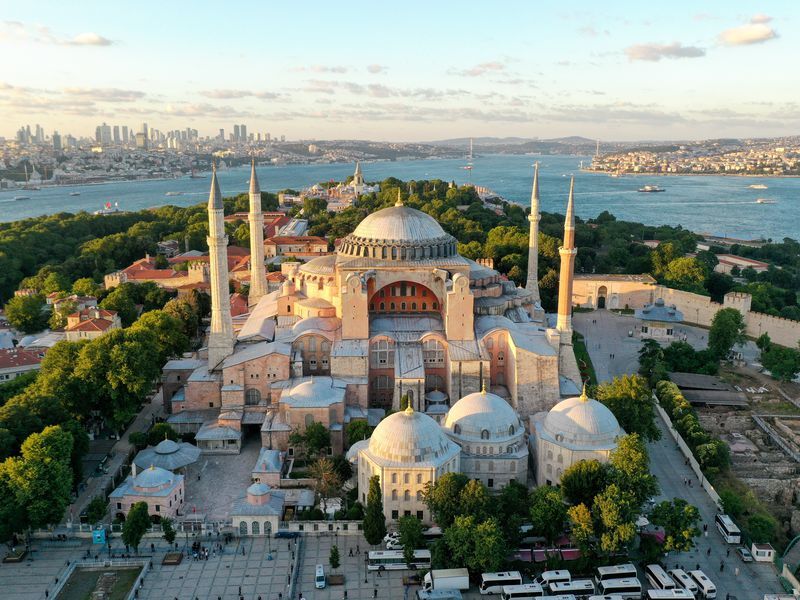 Recently there has been controversy about changes to Hagia Sophia. Dedicated as a 1,500-year-old UNESCO World Heritage Site of religious significance to both Christians and Muslims, the Hagia Sophia was converted to a museum in 1934. In July of 2020 a Turkish court revoked the site’s status as a museum and Turkish President Recep Tayyip Erdogan ordered the space open for Muslim prayer. 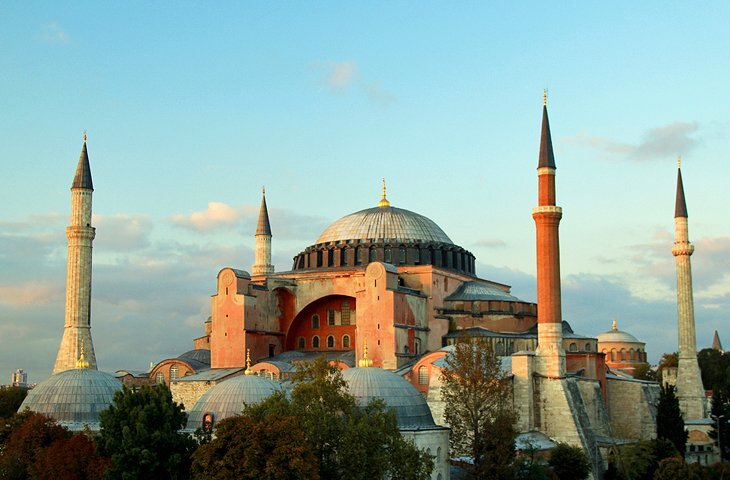 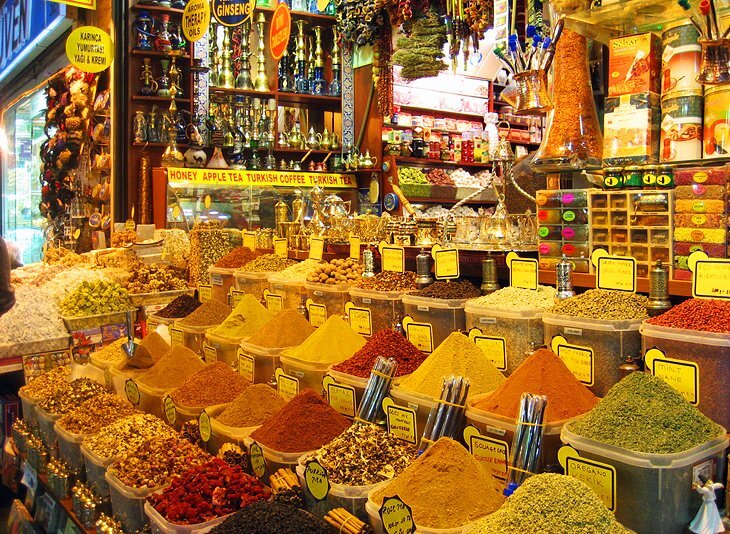 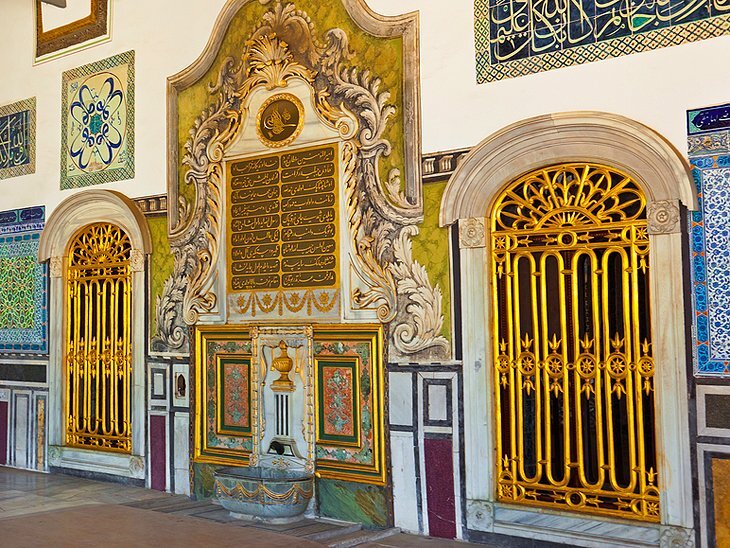 There are so many amazing sites to visit in the city, it will be hard to fit them all into one trip. The Aya Sofya, Topkapi Palace (Topkapi Sarayi) Topka, The Basilica Cistern (Yerebatan Sarniçi) , The Hippodrome, Istanbul Archaeology Museum, The Süleymaniye Mosque, The Spice Bazaar (Misir Çarsisi), Dolmabahçe Palace...these are just a few of the must see locations. Yet while some ancient cities are the sum of their monuments, Istanbul is different. One of its best features is the local people. They have an infectious love of life and generosity of spirit that is apparent on almost every street corner. This vibrant, inclusive and expanding community is full of people who work hard and play hard, treasure family and friendships, and have no problem melding tradition and modernity in their everyday lives. Spending time like a local in çay bahçesis (tea gardens), kahvehans (coffeehouses), meyhanes (Turkish taverns) and kebapçıs (kebap restaurants) will be a highlight of your visit. So remember to travel like a local! 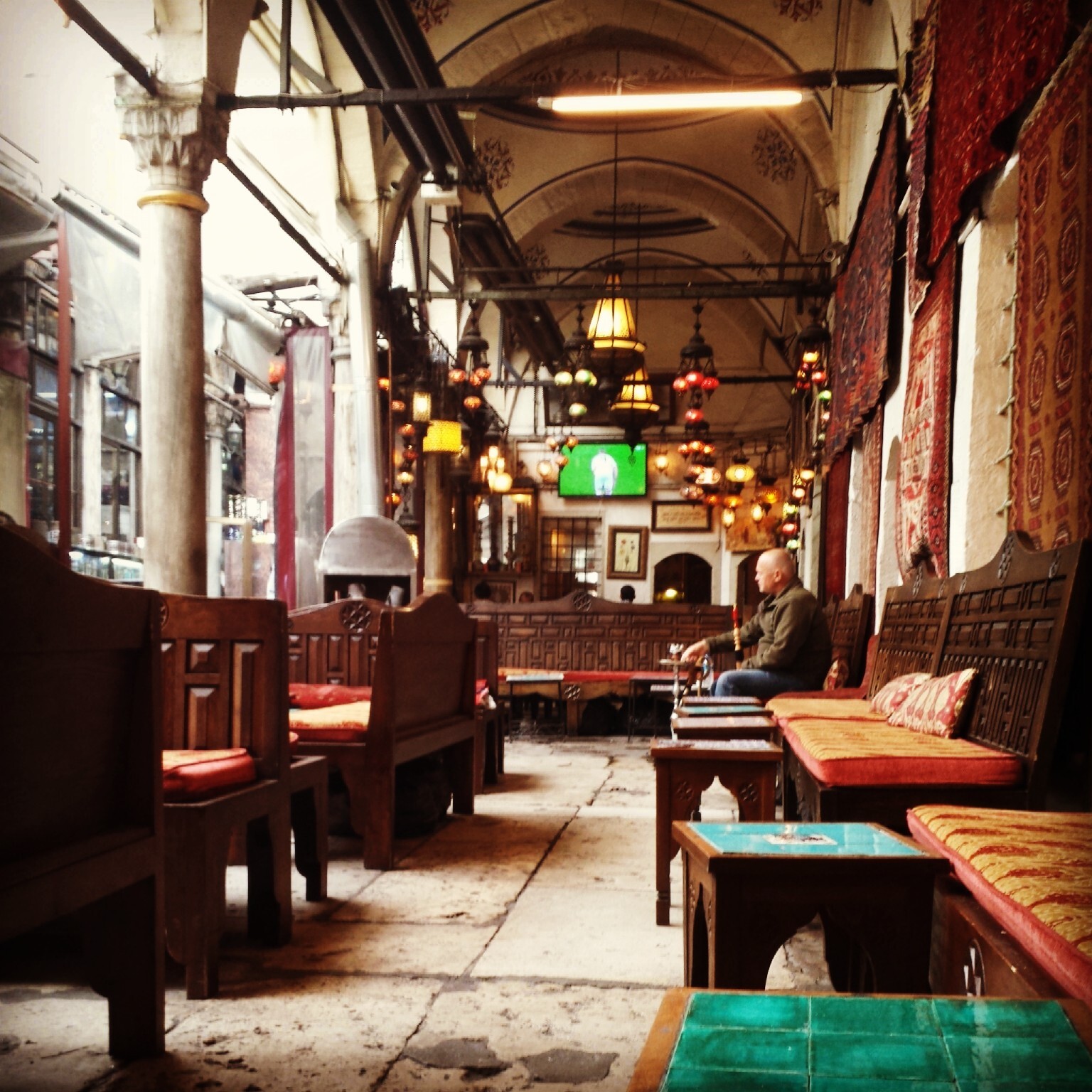 And speaking of food………

As we all know, food experiences can create some of the best travel memories. Istanbul will not disappoint you. Culinary Heritage is a source of pride here. The city's cuisine is as diverse as its heritage and so delicious. To start, the street food scene is tantalizing and plentiful. Much of the preparation can be watched as it happens, making for a unique culinary experience. Simit, Balik-Ekmek, Dürüm, Tantuni, Midye dolma, Lokma, Sahlep, Kokoreç ……the list goes on (I’ll let you research those). For a delicious look at street food check out this video (her laugh is the best part!) but make sure you aren’t hungry first!

How about what we refer to as a sit-down meal? Don’t let the enthusiasm and fun fool you, locals take their eating and drinking seriously – their restaurants are some of the best in the country. Let’s dig in! Most meals are accompanied by Turkish apple tea, the national drink rakı (aniseed brandy) or a glass or two of locally produced wine. Then start your meal with Mezze - a small selection of dishes often consisting of yogurt with herbs, hummus, dolmas (rice-stuffed vine leaves), kofte (meatballs), eggplant salad, white cheese and of course, delicious, warm pide (a savory bread baked with feta cheese, parsley, mozzarella and sprinkled with nigella seeds). Could there be a better way to start a meal? 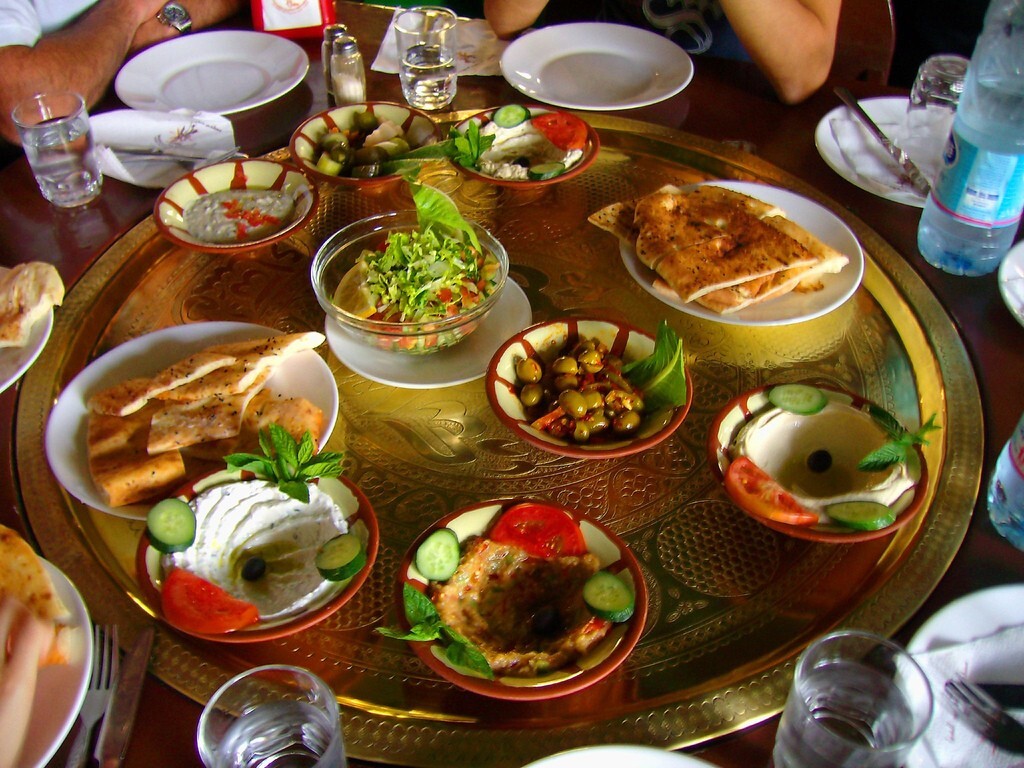 Then dive in to a selection of traditional main courses. Ahh….. Lahmacun. Known as Turkish Pizza, this savoury flatbread is topped with a spiced lamb minced topping, onions, herbs, baked and rolled into hand held delight. Or how about İskender Kebab - thinly sliced lamb served with a warm tomato sauce over pieces of traditional bread. Maybe an order of Manti? Pasta-lovers prepare yourselves - Turkey has its own version of Ravioli! These little handmade dumplings are filled with ground lamb or beef and topped with a creamy yogurt sauce. So good! Another must try – Shish Kebabs, made up of chicken, beef or lamb grilled and served on a skewer with sides such as rice, salad and fries. I know - you are craving Karniyarik! Karniyarik is a big, warm eggplant stuffed with ground meat, onion, black pepper, tomatoes and parsley. Accompanied by Pilaf, this dish is hearty, full of flavour, and perfect for a filling meal. Perhaps some Gözleme? Similar to a crepe, this savoury Turkish flatbread is made from hand-rolled dough and is filled with various toppings such as cheese, meat, vegetables or potato. And speaking of potatoes, how about a Kumpir – a huge baked potato served with every topping you could imagine (Did you see them in the video? Did I mention huge??). 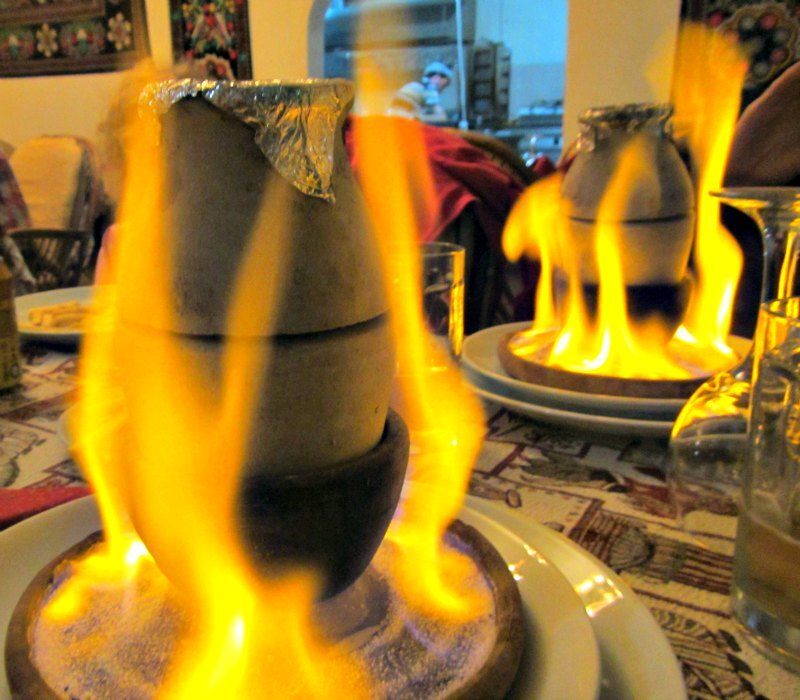 How about a little theatre at the dining table? Ordering a Pottery Kebab will certainly bring you an entertaining (and tasty) meal. Meat and vegetables are slow-cooked in a sealed pot. When it arrives at your table, your waiter will bring out a knife and slice the top of the pot right in front of your eyes and serve you! So much fun. Finally, if you have room, perhaps finish off with some of the many varieties of Lokum (Turksish Delight), Dondurma (Turkish Ice Cream) , or Baklava. You might need to take that to go!

Are you ready to go?

We hope you have enjoyed this trip to Istanbul. It is a feast for the senses.

When travel resumes, we are here to help you check mark this destination on your bucket list!